Even if you aren’t the biggest fan of opera or Broadway, surely you know the name of Oscar Hammerstein.  You probably know the name as Rodgers & Hammerstein.  Oscar Hammerstein is Broadway royalty.  Oklahoma!, Carousel, South Pacific, The King and I, and The Sound of Music were some of the most successful productions of the collaboration of Richard Rodgers and Oscar Hammerstein.  The duo racked up great commercial success and a pile of accolades to include 34 Tony awards, 15 Oscars, a Pulitzer Prize, and a pair of Grammy’s.

Oscar Hammerstein II came from a pretty talented family though.  His grandfather, Oscar Hammerstein I, was a noted opera producer and theatre builder.  He had a flair for staging grand opera productions in his theatres in direct competition with the Metropolitan Opera.  While artistically successful, these productions lost money more often than not.  But that almost didn’t matter. 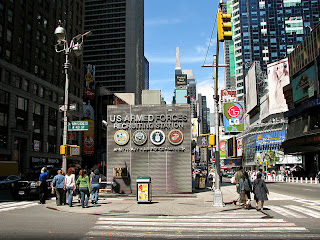 Hammerstein loved the creative expression of building theatres and putting on shows, and losing money was forgivable because he was tremendously successful in the cigar business.  Oscar fled his abusive father in Prussia to find his fortune in New York City.  He began by working at a cigar factory on Pearl Street and worked his way up to being a cigar maker.  The cigar business treated Hammerstein exceptionally well.
The cigar fortune that Hammerstein cultivated provided funding for his theatre building pastime.  One such theatre that generated a lot of attention but failed to prove a financial success was the Olympia Theatre, his fourth theatre.  The Olympia established Longacre as a center of entertainment.  Longacre Square later was renamed Times Square, the Crossroads of America.  Oscar Hammerstein I, a great man of the cigar industry, who left his mark.
Posted by Cigartender at 12:07 AM