How Not to Bleed a Lighter 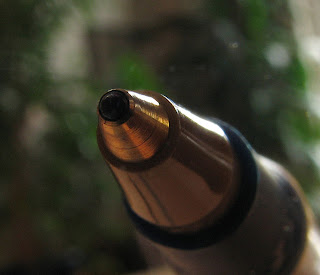 It is important and good housekeeping to bleed any remaining pressure out of your butane lighter before refilling it.  This removes any air and old butane from the fuel tank so you can refill it completely with fresh clean butane.  You can try to cut corners and top off the tank because you don’t want to take the time or waste the butane to bleed it dry when you still have a decent amount of fuel in it.  Most of the time this will work ok, but sometimes the residual air that has gotten into the tank will disrupt a proper flame.  It really is best to just sacrifice anything remaining in the tank and make a clean start.  At the risk of pointing out the obvious, here’s one method to avoid when bleeding the tank.


Never, ever fall for the temptation to bleed the lighter by using a pen to depress the fill valve and release the pressure.  I know they’re conveniently nearby everywhere, and you’re unlikely to do any functional damage to the lighter, but you stand a good chance of making quite a mess.  File this under: better ideas through failure.  I’ll admit to having naively tried this.  It was working pretty well at the onset.  The size of the tip of the pen worked effectively to depress the fill valve and release the butane and air.  However as the liquid butane sprayed out it did a handy job of dissolving what I thought was a fully dried out pen back to life.  In short order the pressurized liquid butane had forced its way past the ballpoint and into the refill of the pen rinsing free any residual ink which was all too happy to flow all over my hand.
Quick reflexes stepped in where skillful planning left me hanging and no significant messes were caused, however the light bulb of realization immediately flicked on and everything added up.  Take it from me, just don’t do it.  Stick to just about any other tool that won’t mar the fill valve.  A large paper clip, a jeweler’s screwdriver, or anything else that is clean and blunt enough is a far better choice.  Knowledge through experimentation I suppose!
Posted by Cigartender at 7:45 AM

Email ThisBlogThis!Share to TwitterShare to FacebookShare to Pinterest
Labels: butane, how not to bleed a lighter, how to fill a lighter, lighter, tips and tricks, Xikar