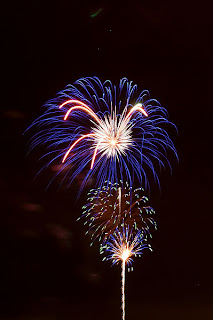 Growing up in Illinois, the 4th of July of course meant fireworks.  As this was the time of more rational municipal fiscal control, our town always had a city fireworks display.  We watched intently as it seemed to go on forever.  The anticipation continued to build until the Grand Finale, which I think was my earliest conception of what grand finale meant.  It was great and made July 4th a highly anticipated day.


Seeing as Illinois had a ban on fireworks sales at the time, and I can’t imagine that has changed with the fun laws the Land of Lincoln likes to impose upon the populace, generally speaking the city fireworks display was all you got, aside from sparklers.  A neighbor of ours happened to do a fair amount of traveling for business.  I think the closest state at the time where he could legally purchase fireworks was Ohio.  So, each summer the last trip he took to clients in Ohio would have him purchasing a substantial assortment of fireworks.  He would use this cache to put on a display for our neighborhood.  We eagerly anticipated July 3rd as the pre-game to the fourth.

With his audience assembled at a safe distance in rows of lawn chairs, he would light the fuses with his cigar and delight everyone with the show.  This was his gift to all of his friends and neighbors as he would never accept money.  Sharing this event with us was one of his many joys.  This is probably my earliest memory of cigars, and it left quite an impression.  Here was this gentleman who lived down the way, who was a successful businessman, who was able to procure for us that which we could not get nearby, and he did it out all out of his own generosity.  My first impression of a cigar smoker was one of a wonderfully benevolent friend.  I never had occasion to share a cigar with him, as I was far too young and in time moved away.  However, it is not infrequent that he crosses my mind, and always when I see fireworks, regardless of the date.


My wish for you on this day of our nation’s birth is that you spend it with your friends and neighbors.  If they’re willing and you’re able, share one of your cigars with them and create some great memories.  Also, do not lose sight of the true meaning of this day: 236 years ago a group of passionate men and women created this nation which we are so blessed to call our home.  They created a model that was, and still is, the envy of the world.  This magnificent creation is not immune to disease and attack and requires our vigilant support.  Please help keep America great by teaching your children and friends what this nation stands for and that which is our duty to uphold.  Let her not falter on our watch!  Happy Independence Day!
Posted by Cigartender at 1:50 PM