What’s in a Name? The House of Rothschild 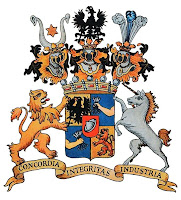 I think there are a couple accomplishments that one can use as a barometer as to whether or not you have “made it” yet.  Guest starring on Sesame Street is an honor that seems to be handed out even more selectively than getting the guest hosting gig on Saturday Night Live.  There is also the mark of achievement that I’ll never attain, which is also a harbinger of the end of your career, that being your own show in Vegas.  How about something that we can all readily relate to the coolness factor: having a cigar size named in your honor.
Every cigar brand and blend has a story.   Many folks have had the privilege to have a cigar named after them.  Often it is because they created the brand or blend.  Other times it is in homage to their life.  However to have a size itself named after you, like Churchill for instance, is something that spans the ages.  The Rothschild family holds just such a title, among the myriad others they have collected over the years.


The Rothschild size of cigar is smaller than that of a robusto, and generally measures 4” to 4-1/2” and has a ring gauge of 47 to 50.  This size is usually slightly more diminutive overall than a robusto.  You will see the Rothschild size, sometimes improperly spelled as Rothschilde or any number of other inelegant variations, used as a catchall of a slew of sizes that are smaller than a common robusto.  You may also see cigars that look and feel like a Rothschild being called a short robusto.  If the ring gauge is less than 50 I would think that size would more appropriately garner the Rothschild name.
But who were, or rather are, the Rothschilds?  The Rothschilds are a dynastic family of great wealth and power that stretches back across the centuries.  The family is appropriately known as the House of Rothschild.   The origin of the Rothschilds traces back to the late 1500s, but the family attained their wealth principally from the banking dynasty that was created by Mayer Rothschild in Europe, beginning in the 1700s.  From there, the family amassed wealth untold and became a significant presence in about every aspect of culture and fine living.  The name may sound more than a bit familiar from your perusal of better wine lists too.  In 1816, five lines of the Habsburg family were granted hereditary baronies by Emperor Francis II, of the Habsburg Empire.  The Habsburgs were no slouches themselves.


How about the real Rothschild of cigars?  In the 1880s, the story goes, Leopold de Rothschild had Hoyo de Monterrey in Havana create a short cigar that would allow him to enjoy all of the full flavor and boldness of a larger cigar in a size that afforded a shorter smoking duration.  I would have thought that he could have opted to smoke in his office and burn a cigar of any length he preferred, but, alas, the Rothschild size thenceforth got its name.
So, on the topic of barons and Rothschilds, we also have to mention the specific cigar made by Macanudo called the Macanudo Café Baron de Rothschild.  Sadly, this cigar borrowed a regal name, but, at 6-1/2” x 42 ring, failed to uphold the tradition of the Rothschild size.  At any rate, next time you read the latest Wall Street Journal headline about the latest big banker on Wall Street, or in London, who can’t quite explain what happened to a couple billion dollars that were entrusted to him, you might reflect, while smoking a Rothschild perhaps, on his likelihood of garnering a cigar size getting named after him.  It’s doubtful, but smoke a small, yet powerful and worthy, toast to the family that did lend its name to an often overlooked cigar size.  If you haven’t had a Rothschild yet, be sure to try one.  If you’re an old acquaintance, you might remember to look this friend up when the cold winds of winter envelop your smoking enjoyment.  They offer all of the pleasure of larger ring cigars in a smaller, shorter in time, and often more robustly flavorful shape.
Posted by Cigartender at 12:17 AM