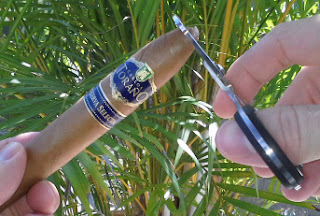 New Year’s Day is a fun day of bowl games, cooking, relaxing, perhaps a few beers, and certainly a couple of cigars.  January 1 also marks the start of the modern cigar industry.  January 1, 1959 marked the culmination of the so called Cuban revolution that was unleashed on the island by Castro’s 26th of July Movement that began with the attack on the Moncada Barracks in Santiago de Cuba.  Batista had fled and Castro had seized the country.  He then set about seizing the personal property and businesses of the citizens.

Many Cuban cigar families tried to remain, work their own soil, and roll their own cigars, only to eventually have to flee from the regime.  Others fled as soon as they could, as these generally well educated men knew that, for at least the near future, nothing was going to be the same.


Fifty-four years ago the Cuban dream was gagged, stuffed in the closet, and replaced with the forced celebration of a Communist system of exploitation.  Maybe freedom will return to Cuba and we cigar smokers will get to see what amazing cigar blends the island holds in her soils.  In the meantime, the Cuban dream lives on and flourishes in Nicaragua, the Dominican Republic, and Honduras.  Many great Cuban cigar men and women emigrated to these other Caribbean and Central American nations and rebuilt their businesses, crafting cigars under their own names again, and sharing their gift of tobacco with all of us.
The Cuban Revolution tore apart an island, a people, and their hearts.  Freedom did prevail, but outside her borders.  It is with gratitude that I look upon the fantastic and robust cigar industry that we now all get to enjoy, though I can only imagine the sacrifice that was required to bring it about.

Fittingly, my New Year’s Day cigar, and my first cigar of 2013, was a Toraño Reserva Selecta Torpedo.  The Toraño family’s history is that of the modern cigar industry.  They left their home and business behind in Cuba and remade their lives and fortunes.  Thank you to all of the Cuban people who have contributed immeasurably to the cigars of today.  Here too is a prayer of hope to those still in Cuba.  May your future also contain freedom and hope one day soon.
Posted by Cigartender at 10:30 PM