One of the two greatest cigar debates: band on or off? – Part 2 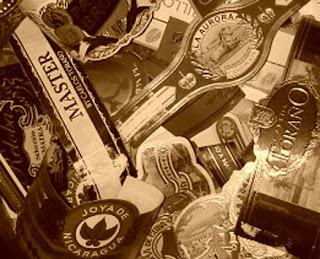 This is part two of the first of the two greatest cigar debates: band on or off?  The first part of this discussion made the profound case for leaving the band on the cigar.  But, what about the contrary position?  Surely there must be some merit to it as well, right?

Proof that I can play devil’s advocate, allow me to plead my case that you should remove the cigar’s band shortly after you lift it from its slumbers in your humidor.  Being a true connoisseur of premium cigars and the exceptional tobacco that goes into them, you have made a commitment that it is the leaf, the richness thereof, and the expert blending that should be celebrated about a cigar.  Akin to hanging a great painting by one of the old masters in an inappropriate frame or on an unworthy wall, it’s a tough challenge to put a band on a cigar that would not take away from the excellence in hand.  Conversely, if a cigar is mediocre at best but has a stellar band, do not be fooled, dear mortal, by the finery on that disaster of a stick.  Look straight at it and see that it truly does look like a dead autumn leaf.

Second, cigars are one of the finest conversation starters in the world.  As such what better way to prompt a conversation among fellow cigar lovers than by smoking a truly anonymous stick?  The asker may then inquire unbiasedly as to the cigar’s provenance and the smoker’s allure to it.  No longer will you allow someone to peer at your Ashton or Padrón band and decide if you are a worthy partner in conversation.  They must initiate on their merit alone.

Removing the band from the equation restores the purity to the pursuit.  Unless you are bamboozled at the point of purchase, no turkey dressed as a peacock will disrupt your disciplined cultivation of your palate.

So, to close out this second part of the answer to this debate: yes, please tear the band off.  It is a superfluous splash of finery and glitz that should not factor into your assessment of the cigar one iota.  Perhaps it is needed to separate the ranks in your humidor if you don’t store in the original boxes, but once you have drafted your soldier of the moment, stripping it of its rank ensures that its performance is judged on its merit and not its legacy.  But really, the choice is yours.  Neither way is wrong; merely different.  I do still think leaving the band on is the more correct answer though.
Posted by Cigartender at 12:32 AM