Cigars are an incredibly basic pursuit, which makes them so easy to get interested in.  They’re also one of the most complex animals out there, which is why they fascinate me and are a ton of fun to learn about and enjoy.  But, at their core, there are just a few basics characteristics that are inherent to all cigars across the gamut of price and strength.

All cigars fit into two basic shape classifications: parejo or figurado.  Parejos y figurados.  Parejos have parallel sides, which seems like a similar word in English, although parejo really means equal.  So, parejos have equal, or parallel, sides.

Figurados are not shaped like parejos in that their sides taper or have a shape to them.  Figurado means shape or figure.  So, a straight sided cigar is a parejo.  A non-parallel sided cigar is a figurado.  Parejos have a fairly blunt, rounded cap.  There can become gray areas based on non-standard shaped caps, like a twisted head, such as on the Nica Rustica.  For a reasonable interpretation though, unless the cap has a significantly shaped taper, such as a belicoso or torpedo, it is safe to assume that the shape of the cigar would still be considered a parejo, like a Churchill.
Read more »
Posted by Cigartender at 11:37 PM No comments:

The Shot Heard Round The World

Two-hundred thirty-nine years ago, roughly a dozen miles northwest from the city of Boston, musket fire rang out at dawn in Lexington, Massachusetts.  Dubbed “the shot heard round the world”, it was an event that we all learned about in our American history class or social studies, as they began calling it when I was a kid.  While not the first skirmish against the British Empire, it is recognized as the first armed conflict under orders by the thirteen colonies against the mother country.

Our patriot forefathers, who stood shoulder to shoulder and ushered in the American Revolution, did so because they had a shared belief that there was a better way and that an oppressive government that tyrannically stood in the way of freedom and liberty must not stand.  That dream was realized and this nation was born.  We are the stewards of that dream, and this great monument is tarnishing on our watch.

Read more »
Posted by Cigartender at 12:04 AM No comments: 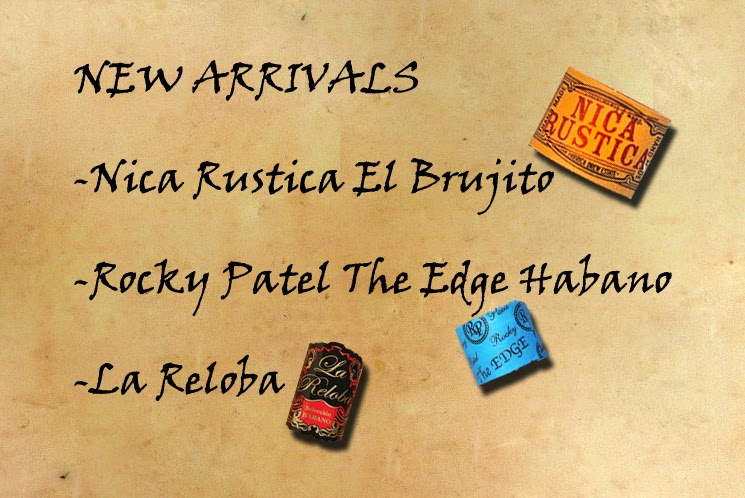 We got some new arrivals into the humidor.  Not surprisingly with our love affair with all things Nicaragua, these three new cigars are all from that outstanding tobacco nation.  The new additions are the La Reloba Habano, the Rocky Patel The Edge Habano, and the Nica Rustica from the tobacco witch doctors at Drew Estate.

I can't wait to smoke these and get them posted on the site so you can get some too.

I'm also working on some "what we are smoking" deals that will let you grab a 5-pack of whatever cigar we're currently obsessed with this week.  Stay tuned for reviews and deals!

Shake it Off – Cigar Relighting Tip

Well made cigars are generally blended with the right combination of tobacco leaves to provide for a good, even burn.  Sometimes a cigar will smolder endlessly while neglected on the ashtray.  Other times you may find that if you don’t continue to draw on it every couple of minutes that it will quietly extinguish.  This happens, and it’s not immediately an indication of a poor quality cigar.

Possible causes for a cigar that goes out are that it is a particularly oily ligero blend and the tobacco is so moist that continual combustion requires some additional attention from you.  It’s possible that the cigar is a bit over-humidified.  Or, you could be wholly to blame by dominating the conversation and forgetting to draw on your cigar now and then.

Read more »
Posted by Cigartender at 12:41 PM No comments:

Email ThisBlogThis!Share to TwitterShare to FacebookShare to Pinterest
Labels: ashtray, cigars, combustion, how to light a cigar, how to relight a cigar, lighters

What’s in a name? Nicotine


Carl Linnaeus, the “Father of Modern Taxonomy”, sorted and grouped species, both plant and animal, into logical arrangements that gave clarity to their relationship, origin, and combinations.  Linnaeus had a significant task before him of naming and categorizing tens of thousands of species.  So, clearly, being a logical and efficient scientist, he often relied on naming species after the individual who first discovered and described it, or whomever was prominently known to be associated with the species.

Read more »
Posted by Cigartender at 8:40 PM No comments:

January is the time of lists.  Or, at least it used to be.  We mere mortals are inclined to make lists of resolutions and goals for the New Year.  The end of the year and the beginning of the new one is also the time of the retrospective lists that seem to be published on every conceivable topic from countless media outlets.  Cigar Aficionado publishes their famed, acclaimed, loathed, and jeered, depending on your perspective, annual list of the Top 25 cigars of the year.   Many brands have been placed firmly on the map by their inclusion on this list.  Others seem to flourish in relative obscurity because of their omission from the list.

Having generally resisted quantifying cigars, since I firmly believe that my personal 93 may not be your interpretation of what a 93 should smoke like and that we can share more about a cigar’s good points through a conversation rather than distilling it down to a single statistical point, I have similarly resisted the notion of making a Top Cigars of the Year list.  Curiously enough I relish reading every published top-cigars list that I come across, both old and new.  It’s a unique chance to see how someone tries to concisely paint a picture of what their smoking preferences happen to be.

Read more »
Posted by Cigartender at 12:11 AM No comments: